4 statistics that show the impact of student response systems

"With student response systems, you're giving every student a voice, even the introverts" - Edna Ross, Lecturer and Committee Chair at University of Louisville (source via Campus Technology)

There has been a vast amount of academic research that has been published in the last decade about the impact of student response systems (SRS) in higher education establishments around the world. In this blog we highlight some of this research that looks at student feedback, as well as quantitative analysis of the effects of an SRS on knowledge retention, active learning and ultimately student success.

The above paper sums up the importance of interactivity in the classroom referring to a study undertaken by the Indiana University which surveyed over 6000 students. The results unsurprisingly showed that interactivity had a huge impact, specifically that interactive student engagement is 'twice as effective as the traditional lecture approach'. To improve levels of interaction in class many lecturers are looking for student response systems that are accessible on a students’ own device (mobile, laptop etc.) The systems, often mobile apps, offer simplicity, better reporting, great feature sets, inclusivity as well as cost savings and reduced maintenance due to the lack of hardware or physical clickers.

The table (shown below) in this paper clearly shows the benefits of using an SRS tool in lectures as the advantages clearly outweigh those of the traditional approach. At the time this paper was published, 'clickers' or SRS hardware were at the forefront of engagement technology, however with the advancement of mobile and software technology, companies like Vevox have made a software solution that adds all the benefits of the clickers and so much more! Find out more here. 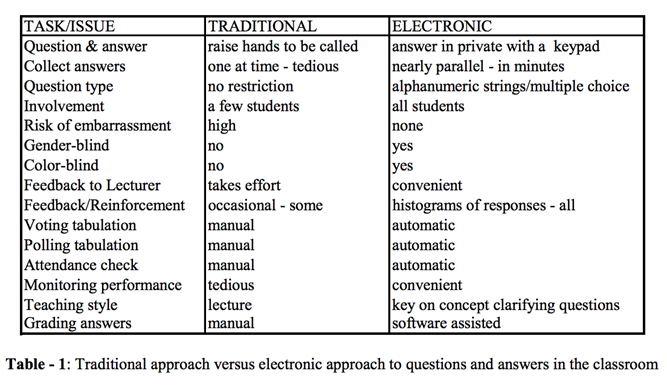 Stat 2- Over 75% of classes surveyed at Glasgow University agreed these three advantages were key to an SRS improving a lecture: 'checking understanding, allowing lecturers and students to identify problem areas, and makes me think more about the course material'- Draper & Brown, University of Glasgow Study

This study from the University of Glasgow detailed the roll out and use of electronic voting systems (otherwise known as a student response system) to see if student engagement levels increased when these tools were used.

Notably, in the first couple of years of using student engagement technology, the three common features that were seen as important were:

1. Gauging knowledge retention and understanding of presented course content via instant feedback.
2. Allowing students to think more in depth and critically about the content and questions being proposed to them by each student giving an independent answer to live polls.
3. Anonymity is often key to achieving these benefits and getting students to participate without hindrances.

Educators from Glasgow University therefore proposed that student voting tools can be used effectively within this structure:

This study shows that student voting and Q&A tools have become crucial to creating an active learning environment and crafting successful lectures, with the lecturer still remaining at the heart of this success.

Academic Blog: 'Taking off like a rocket: Vevox gets stellar feedback' - University of Southampton, Digital Learning.

This study highlights the power of Vevox as an SRS and its importance in obtaining instant feedback from students, especially at critical moments during lectures to check if students have grasped the topic. With a mobile app such as Vevox, student engagement and participation is easily increased as students want to vote on polls and have their voice heard, as this lecturer testifies,“When I ask a question, and ask students to raise hands, only one or two students contribute. With Vevox, the contribution rate is nearly 100%. This is unprecedented"- Lecturer, Southampton University.

Stat 4- "Vevox provides a bridge between students and lecturer. In our survey of 168 medical students, 89% felt that teaching at the medical school could improve with the use of Vevox" University College London, Medical Department Blog

This statistic shows the sheer impact that an SRS system like Vevox can have on students’ perception of learning at university. It also helps to provide a more interactive, two-way relationship between the students and lecturer through live feedback via polling and Q&A. This use case of using Vevox also shows how an SRS helps with identifying any confusion or misconceptions that students might have and resolve these as soon as possible, with minimal disruption. In the UCL student survey, students were asked to contribute questions via Vevox. The report states, "over the course of 10 lectures 213 questions were asked using the Vevox app. If these questions were asked verbally that would equate to over 20 interruptions per hour long lecture, which would be impractical and distracting for both audience and lecturer".

From these studies and research papers there is no doubt that Student Response Systems provide opportunities to increase engagement, participation and understanding in the classroom.

If you're looking for a quick and easy student response system, why not try the award-winning Vevox App for your classes here.