Learn how UKTV are using Vevox to increase interactivity in team meetings – and see why they’ve given Vevox a 5-star rating!


UKTV is a British multi-channel broadcaster, home to stations such as Dave, Drama, W and Yesterday. Formed on 1 November 1992, UKTV was created through a joint venture between the BBC and Thames Television – and is now wholly owned by BBC Studios. UKTV is one of the largest Television companies in the United Kingdom.

I wanted to make my team meetings at UKTV more interactive and fun.

Rated number 1 by our customers

We're top of the pile 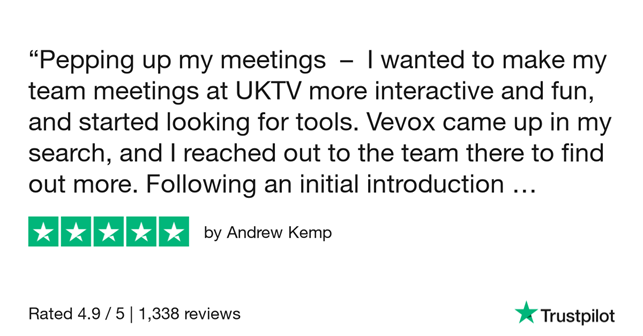 Andrew Kemp from UKTV shared in a Trustpilot review why his search for a tool that would improve interactivity led him to using Vevox. You can read Andrew’s full review below:

I wanted to make my team meetings at UKTV more interactive and fun, and started looking for tools. Vevox came up in my search, and I reached out to the team there to find out more.

Following an initial introduction session, we met Dom, who really took us through the capabilities of the platform, in a fun and engaging way.

Dom has been patient with us, offered trial opportunities to get hands on with the tool. Very happy with the process so far, great engagement from Dom, and look forward to working with the Customer Success Team now we are a customer.


We’re rated Number 1 by our customers, and you can see why by reading more of our business stories here!